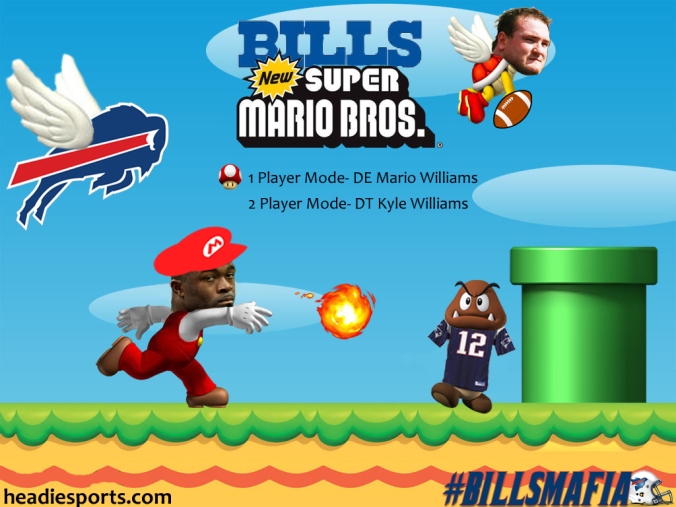 Per the request of Bills fans over at Buffalo Rumblings, here is a similar version of the Super Mario Bros. pic with Kyle Williams to represent the tremendous defensive line advantage the Bills will have moving forward (let’s also not forget #3 overall pick from the 2011 NFL Draft, Marcell Dareus either).  It would now appear the Bills are no longer pursuing Manningham, after locking up the real Super Mario for $100 million over 6 years.

According to Buddy Nix in an appearance on Pro Football now with Mike Florio this past Friday, it appears the Bills will be seeking a WR with a bigger frame and 4.4-4.5 speed in the NFL draft, perhaps as early as the 2nd round.

As the weekend following the signing carries on, the #SuperMarioParty continues on in Western New York!  Reports from Buffalonians suggest there was not much work productivity this past Thursday, as fans followed along with the huge signing at work.  Additionally, fans started up a spirited and random car horn honking campaign all the way home throughout 5 o’clock traffic on I-90 thru Buffalo to celebrate the monumental Super Mario signing.

Luke Russert continues to operate in his late father’s stead as defacto leader of the #BillsMafia.  Using his national communication platform, Russert tweeted back and forth with ESPN Chris Mortenson as Bills fans waited for the word as to whether or not Mario was indeed signing with the Bills.  In the moments following the successful Super Mario signing, Mortenson responded to Russert who tweeted “Yeah baby!!! Mario in #Buffalo!!” with “I can see your Dad smiling and pumping his fist right now.”