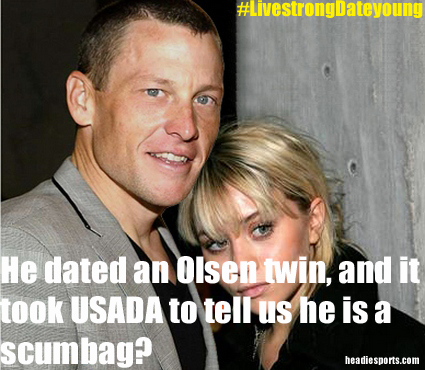 There’s no shaking the Full House effect.  Bob Saget can go around for another 15 years as the most gutter mouthed, culturally insensitive comic on the comedy club circuit and we’ll all still remember at least part of him as Danny Tanner.  Same goes for the Olsens, if not even more so, as they rammed 892 straight-to-VHS unintelligible sing-a-long videos into our collective consciousness over a four year period (that without fail were always on in the backgrounds of extended family gatherings to keep the younger cousins quiet, while the older people could get drunk).  So yeah, when I heard that Lance Armstrong dropped other more age appropriate (and quite fetching) gals like Sheryl Crow and Tory Burch for the likes of an Olsen twin, I may have been quick to pass judgement and raise an eyebrow or two.  Maybe it’s ‘only 15 years’ of age difference, but he’s got to know he can’t date an Olsen twin, it’s just creepy.  Prove to me that Mr. Livestrong, as an awkward 17-year-old cranking out RPMs on his stationary bike in his parent’s basement, never once viewed a re-run of Full House and then maybe we can re-visit this conversation.

With that, it’s Friday, and I’m off to go listen to some of the early Jesse & the Rockers LPs.